On Wednesday evening a team of 20 Year 5 and Year 6 pupils went to Longhill to participate in the Deans Sports Partnership Indoor Athletics competition. The team started well, winning several of the early races. As the competition continued the points gap closed however, with a final points difference of only 12 points across the  schools compared to 35 points in last years competition; a very close fought event. St. Margaret’s pupils ran, jumped and threw really well and were definitely a team to be proud of. They placed jointly in fourth place alongside Rudyard Kipling at the end of the evening and should all have slept well after all their exertions. Well done team.

14 children from Years 5 and 6 braved the chilly winter temperatures and the mud on Wednesday to represent the school as part of the Deans Schools partnership team at the City-wide Cross Country competition at Waterhall. There were some fantastic performances with runners competing in their Year group heats against up to 300 other competitors. A special mention goes to Brooke in Year 5 for her excellent result, coming 17th place in her race. This along with all the other performance contributed to the Year 5 girls Deans Sports Partnership team winning their event, well done girls. All those who took part should be commended for their efforts and for enduring the wintry conditions too, well done team!

A team of 5 boys and 5 girls from years Five and Six went to Longhill after school on Wednesday to compete against the other four schools in the Dean schools partnership in the indoor cricket competition. The competition was very close but our team played exceptionally well; winning three out of four matches. Sensational batting, bowling and fielding from all the team meant that, when the points were tallied up, St. Margaret’s came in first place and were presented with gold medals.

Girls from Year 5 and 6 represented the school in a girls only football tournament on Wednesday. The tournament was hosted here on our playing fields at St. Margaret's and and the rain stopped at just the right time to enable the tournament to go ahead. Our girls played really well against some tough competition from some of the bigger schools in the area and secured fourth place overall amongst the seven teams that took part.

On Tuesday afternoon, 18 children from Years 3 and 4 went to Longhill Sports Centre for a badminton festival with other schools in the Deans Sports Partnership. With Sports Leaders from Longhill working alongside Badminton England coaches the pupils all had a fantastic time playing games and honing their skills in an introductory event to enable them to try out this fast paced sport. At the end of the session they were treated to a demonstration by some of the ex-England players who wowed the children with their lightning fast moves. Hopefully there will be some future badminton stars amongst those who attended. Watch this space...
Yellowave inter-school beach sports competition.
The sun shone on a beautiful morning at Yellowave beach sports complex as the team arrived to compete in a multi-sports festival to round off the Deans Sports Partnership league for 2018/2019.A team of 14 pupils from Year 6 competed in 6-a-side matches in football, tag rugby and beach volleyball. After a quick warm up, we were straight into the matches and our volleyball practices at school paid off with some convincing wins from both our teams. Throughout the day I can say that every child played to the best of their abilities and most importantly played every point in every game. They showed excellent sportsmanship and enjoyed a fantastic day of sport in the sand and sunshine. When the final scores were tallied we placed third in football, third in tag rugby and third in the beach volleyball out of five teams taking part. One more goal in the football would have pushed us up to second place, which was just one example of how closely fought the competition was. In the overall tournament today across all three sports we placed third, narrowly missing a second place position. It was a great opportunity to have a larger team participate in an event and share the fun and excitement of competing in inter-school competition with lots of children who haven’t always had an opportunity at other events in the year and I was really proud of all their efforts and achievements today. Well done Year 6!
St. Margaret's Sports Day 2019

After so much rain overnight there was some anxious, early morning checking of the athletics track to make sure we could still go ahead today. But thank goodness we did. What a great morning of sporting celebration! A competitive element was added this year, along with some changes to the events themselves to ensure that we had an inclusive, challenging Sports Day for all the children at St. Margaret’s. The children all gave 100% and there was a great atmosphere of sportsmanship and team support. Despite the rising heat, the athletes continued to push themselves right up until the final relay event securing their last few points for their house teams.

At the end of the morning the winners were Sapphire for the Infants and Ruby for the Juniors. Well done St. Margaret’s 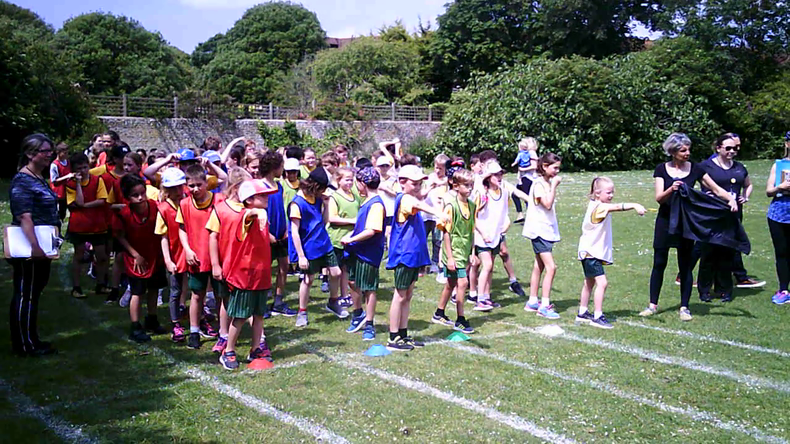 After a great deal of training in PE lessons, the team were selected and began preparing to compete at Withdean Sports Complex. The weather hadn’t looked great on the lead up to the event but, on the day, we escaped the rain. Mr Jones, Miss Sinclair and Mrs Yates took 28 pupils to compete in Track and Field events against 22 other schools across Brighton and Hove. The athletes all performed brilliantly and even with a couple of dropped batons in the relay events we secured 3rd place in our group of 8 schools which is a fantastic result when up against some much larger schools in each year group. Special mentions go to Sisi for her gold medal in both the 75 and 600m races, Josh and Leonardo for golds in the 75m sprints, Josh and Morgan for gold and silver in the throwing event and a final gold for Amabel in the long jump. Silver medals were taken by Leonardo and Sienna in the long jump, Morgan in the throwing, Lilijah, Lottie, Sienna and Morgan in the sprints and the Year 6 girls relay squad also took silver in their event. One bronze medal was also bagged by Amabel in a fantastic 600m run. It was an absolute pleasure to organise the team and take them to the event too and I’m really proud of all their achievements. Go St. Margaret’s!

The sun was shining and the children were all ready for a lovely afternoon of tennis. They all played really well and with  one or two different results we would have been amongst the medals. Unfortunately, despite some convincing wins on each court, particularly from Morgan and Sienna, the overall tables put us in 3rd or 4th position out of five schools on each court.

Court one - Zac and Amabel 4th

All our players enjoyed the afternoon and improved a great deal with the experience. They particularly learnt the importance of playing every point, even when the game isn't going their way as every point counts in the world of sport! 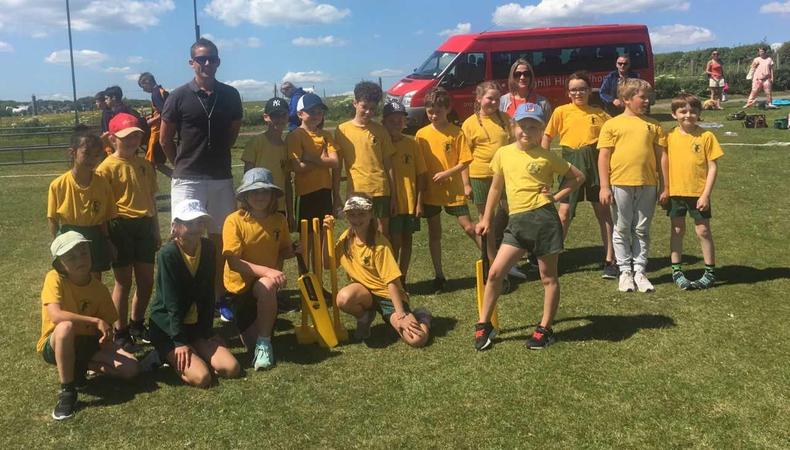 On Tuesday 21st May, 16 children from Year 4 and 5 were selected to represent the school at the Rottingdean Cricket Festival. The children played matches against other schools in the Deans cluster and had an opportunity to use the Sussex Cricket Roadshow equipment too. The sunny weather made for an excellent day of cricket with the teams playing well and winning many of their matches.  It was great to see so many children progress so much over the course of the day too and their behaviour, sportsmanship and attitude to other teams were a credit to the school.

On Tuesday 19th March, a team of St. Margaret's pupils met with other schools in the Deans Sports Partnership to compete in a netball tournament. Our team played fantastically and secured second place for us in the competition. Well done team!

Sixty pupil's from St. Margaret's took part in the mini-mile event at Longhill on Wednesday evening, competing against other schools in the Deans Partnership in a cross country race. The children have all worked really hard training at school and performed brilliantly at the event too. Special mentions go to Brooke and Sisi who both won their races and to Amabel and Evie who came second in theirs. These all helped to propel the girls team to an overall win with St. Margaret's team as a whole coming in third place. Well done to all the children who took part. As of the 14th March we are currently in third place in the Deans Sports Partnership League, only one point behind second place!
Top
Cookie information
Cookie Notice